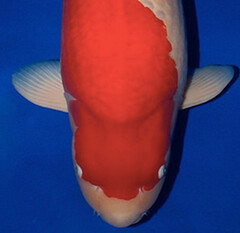 A Sakai Fish Farm Kohaku does it again! The Grand Champion award of the Interkoi held in Kalkar (Germany) is won by a three step Kohaku that just arrived in Europe one week (!) preliminary to the Koi Show. She measures 83 centimeter and is owned by two Belgian hobbyists, named Hilde and Michel. Handling dealer is Danny’s Koi Café. She won above a Momotaro Sanke that measures 94,5 cm! Below you can see the six year old: