How To Treat Ulcers In Koi & Goldfish

How To Treat Ulcers In Koi And Goldfish

Ulcers (red sores or spots) are fairly common in koi goldfish ponds and can be caused by a several different things. You need to treat ulcers in koi and pond fish as soon as possible.

Ulcers are caused by bacteria (Aeromonas sp.)that have penetrated through the koi’s defences (mucous (slime coat), skin and scales). Ulcers often start out very small, but if left untreated can become large enough to kill the fish.

If you need to treat ulcers koi or other pond fish it is important determine what likely caused it in the first place. In most cases ulcers are caused by parasitic infection,  poor water quality and even spawning.

If you determine you have an parasite problem in the pond, it is important to treat for parasites immediately, as well as the treat ulcers in koi.

If left undetected for long, often develop a secondary infection of fungus growing from the dead tissue of the wound. Beneath the green/gray fuzz of the fungus is an advanced ulcer

There are many different treatments for ulcers, some work better than others, but you will always have the best results if you catch it early and treat immediately.

Although injections are probably the most effective way to treat bacterial infections in koi and goldfish, they are not very practical for the average hobbyist. If you are interested in injections, you will need to see your local veterinarian.

These are often very effective treatments for ulcers. Typically, one uses iodine, potassium permanganate or hydrogen peroxide to kill the bacteria, clean and cauterize the wound.

Treating a pond with antibiotic sounds like a great way to combat bacterial infections, but it does have some drawbacks. They can be very expensive in larger ponds and they will not only kill the bad bacteria in the ulcer but also the good bacteria in the filter, resulting in poor water quality. This is where natural remedies such as Melafix works well.  We often use it here in our fish holding systems when receiving new koi and goldfish because does help to heal split fins and scrapes caused during transport and prevents infections from occurring. Pimafix is another effective product that is similar to Melafix that works well to treat both  fungus and bacteria.

Medicated dips or baths can work well to treat ulcers in koi, Tricide Neo is extremely effective at conquering ulcers. However the only downside is it must be used daily for 4 to 5 days and the duration of the bath must be times precisely. If you don’t have a hospital or quarantine tank it is very difficult and stressful to catch a fish from the pond repeatedly.

Using a good medicated food is a simple and somewhat effective way to get medication directly ‘into’ the fish, as long as it is eating. There are recipes available online for making your own medicated food.

Our  Suggested Method To Treat Ulcers In Koi

Steps To Treat Ulcers in Koi:

You should see an improvement in the appearance of the ulcer in 2 to 3 days if the treatment is working. The rough red tissue should gradually turn  a pinkish colour, then white and smooth. It may take several weeks to months for the healing area to return to the natural colour of the fish. A noticeable scar may remain. 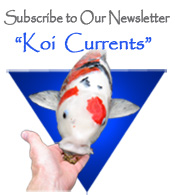 For specials, tips, advice and more